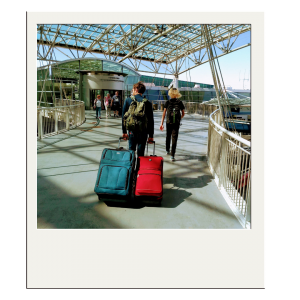 July and August were great months to travel and eat ethnic food! I was lucky to be able to go visit my grandmother in Serbia and let her spoil me with treats and love. Getting there is always a long journey, but this time we were able to fly directly to Frankfurt and catch a connecting flight to Belgrade. My grandmother lives in a city called Zrenjanin which is about an hour’s drive from the airport. I have such strong memories of being in her kitchen or the bedroom where I sleep, and I always enjoy being there.

I don’t really have any recollection of seeing anyone who was disabled, however. It’s almost as if there were no autistic people there, which of course isn’t true – autistics are everywhere! My father has an acquaintance who started a school for kids with disabilities on her own, and eventually got government funding to expand the program and remodel the building where it takes place. So programs do exist, but you need to have financial resources to use them. 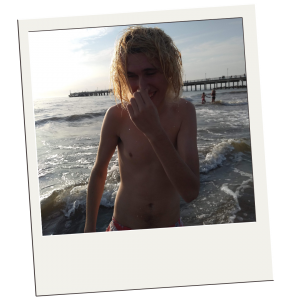 We were in a small supermarket, and I was straightening the candy display like I like to do at home when my mom tried to get me to stop because she was worried I would get in trouble for messing with the products. My father (who is Serbian) was talking to the check-out guy, who surprised us by saying that 1) it was fine, and 2) there was another young autistic man who did the same thing! So disability is a little more visible in Serbia these days, it seems.

I was really impressed with my time in Lithuania. It is a beautiful country with the most delicious beer called “Švyturys” which I enjoyed with traditional beet soup and something they called “cepelinai” (“zeppelins,” or giant potato dumplings filled with meat). I could eat them every day! I especially wanted to see the Baltic Sea, so my mom (who is Lithuanian) rented a car with GPS, and we were on our way. It was a lot of fun, and the countryside reminded me of the Willamette Valley in how green and lush it was. We letterboarded at the coast, at the top of the Gediminas Castle, at cafes and restaurants all over the country – everywhere, in other words. Only here and there did we get stared at – for the most part, no one thought a second thought about what we were doing. It was pretty similar to being in the States. 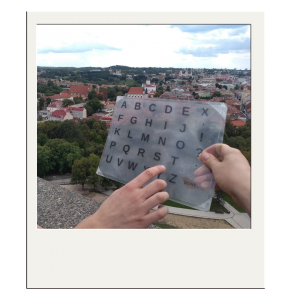 But again, I didn’t see any people with visible disabilities. I overhead my mom’s friend telling her that it was still possible to hear people mock people with disabilities openly, and attitudes carried over from the Soviet occupation were pretty common. I felt very comfortable in Vilnius, but think the smaller towns and villages would not be as fun to be disabled in.

Overall in my travels, I have been accepted for being a disabled person, but I also am very visible, and wherever we are, my parents model their assumed right that I have an equal place. It means that anyone who is critical of my inclusion would have to face them, and there haven’t been any people brave enough! I like to think that me being publicly autistic in foreign countries is an act of advocacy on behalf of the local people who can’t or don’t have a way to be out in public. For them I say, “Free my people!”